Why should you consider Wasp and Hornet Control in Kitchener Waterloo Cambridge, Guelph or Bratford area? 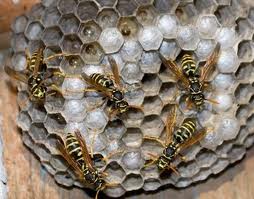 Wasp and hornet control is a job for the professional pest controller.  Wasps and hornets are extremely aggressive and attack in swarms if they are disturbed or they conceive a threat to their nests.

Kubassek Pest Control are your local specialists in wasp and hornet control in Kitchener Waterloo Cambridge Guelph and Brantford area. Give us a call.

When you consider that a single sting from a wasp or hornet can kill in some instances, taking on hundreds of angry wasps or hornets is not wise. Apart from the obvious danger the person interfering with the nest faces, the agitated wasps or hornets will also attack other people or animals in the vicinity without mercy.

Wasp and hornet control needs to be carried out by highly qualified and trained professional pest control technicians for the safety of all those in the vicinity of the nest.

Not only does the professional wasp and hornet control technician have all the correct safety equipment and eradication solutions, they also have expert knowledge about the wasps and hornets regarding their habitats and lifestyles. The site of the nest may not always be obvious, but the expertise of the wasp and hornet control technician will be able to track the location without risk to themselves or other people or animals.

The wasp and hornet control professional will carry out all the safety measures necessary to protect the client and any other people or animals in the vicinity from the angry wasps or hornets, before starting the process of eradicating the wasps or hornets.

Apart from the dangers of being stung by these insects, wasp and hornets can cause damage to property. Some wasps and hornets are happy to make their home in wall cavities, attics, or roof space.

Other hornets and wasps, such as the yellow jacket, will make its nest on the ground, while others will make a nest in a tree or underground, these nests can be potentially terribly dangerous as they are often unseen, and can easily be disturbed when gardening or by children playing or simply by stepping on them. This single accident can cause a swarm of hornets or wasps to attack with potentially fatal consequences. Should you suspect a wasp or hornet nest is in the vicinity, it’s best that a professional wasp and hornet control company is consulted as soon as possible to eradicate the problem.

The problems of wasp and hornet control are not restricted to urban or rural areas. Wasps and hornets will also make their nests in city areas. Virtually any building or piece of ground is a potential home for wasps and hornets. What many people don’t realise is that wasps and hornets unlike bees eat food, and unfortunately it can be human food! Their preferred diet is other insects, supplemented with nectar, but human food will suffice when there is a shortage of insects, which is why they are such a nuisance at picnics or barbecues.

Business premises becoming invade by wasps and/or hornets could spell disaster. Staff and clients could be put at risk of being stung, and aside order of wasps never goes down well in a food establishment. Because of the feeding habits of hornets and wasps, they do pose a threat to health if they come into contact with foods apart from the danger of stinging. Wasps and hornets like flies forage in waste and discarded foods.

Kubassek Pest Control are your local specialists in wasp and hornet control in Kitchener Waterloo Cambridge Guelph and Brantford area.