In Ontario, there are only a few poisonous snakes: the timber rattlesnake, and the massasauga rattlesnake. Both are very uncommon in Kitchener, Waterloo, Cambridge area, unless they’ve been transported,  and are rarely found around the home, but if they are, it can be a dangerous problem.

The snakes most commonly found in Ontario are garter snakes and water snakes, though there are 17 species total. All of these are generally harmless, and they are beneficial to the controlling rodent populations.

Obviously most people would prefer to not have snakes enter their house.

And a lot of people are fearful of snakes in general, and don’t even want them in their yard. 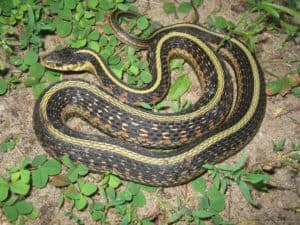 Whether inside your house, or in your yard, in the Kitchener, Waterloo, Cambridge area,  Kubassek Pest Control can catch and remove the snakes. Call us at 519 650-2025 to get an estimate and set an appointment.

Snakes are scaly, legless reptiles that slither across the ground. They’re often seen sticking their tongue in and out, as if they are tasting the air. All venomous snakes have triangle-shaped heads and pits between their eyes and nostrils containing infrared-sensing organs. They also have elliptical-shaped pupils as opposed to the round pupils found in other snakes.

Garter snakes are thin, often black snakes with yellow stripes running along their bodies. Some varieties can grow upwards of several feet, while others won’t grow more than a few inches.

Water snakes are found in almost every body of water in the Ontario. They’re typically brown or black with lighter splotches and marks. They can grow up to 42 inches, and they’re know to be aggressive. Because of their size and aggression, they’re commonly mistake for a cottonmouth snake. But Cottonmouths don’t live in Ontario.

Snakes often enter homes and yards in search of food or sheltered places to hibernate for the winter. They look for areas that attract rodents like houses, barns, and gardens. They also look for dark, damp places in yards to retreat to after catching a meal, like lumber piles, discarded tires, and loose rocks. Most snakes are not dangerous, but can still be frightening if they’re in your home, or if large snakes are on your property (Imagine seeing an 8 foot black rat snake in your lawn!).

If you’re having a snake problem in or around your home, please call us at 519 650-2025. We will quickly and humanely locate and remove the snakes, and then seal the entry points to your home and repair any damage the snakes may have caused.